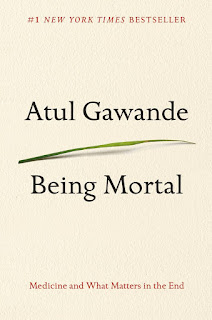 I recently read a profoundly challenging book, Being Mortal by Atul Gawande. My son thought I might enjoy it. He was surely aware of my strong aversion to anyone using heroic methods on a faint chance of reviving my body if it is obviously failing. Years ago I completed an advance directive clarifying that I declined all medical treatments unless there was a reasonable chance that I would return to a somewhat normal life. And for clarification, institutional life does not qualify as normal life. I'm terrified of pain and helplessness, but I'm not afraid of dying.

My wife and I have been through three protracted deaths of our elderly parents. Two declined treatment for their incurable illnesses. One died in the same bed she had slept in her last nine years. The other moved from his home to hospice care where he lived a couple of weeks. Neither experienced tubes, ventilators, monitors or intravenous lines, with accompanying beeps and buzzards  and other accoutrements of modern medicine. They only received pain killers as needed to keep them as comfortable as possible.

Unfortunately, my step-father slipped into the horrors of modern medicine's penchant to value life by the number of days that you breath. So after a hideous operation that should have never been performed, he was tortured for two months in an ICU until death finally relieved him.

Mr. Gawande does a wonderful job introducing us to the reality of death in modern society. He explains how we got here and how wrong it is, and then shows us some of the options that are available to help us bring back some dignity to the elderly and their dying. In the introduction to his book, he does such a great job summarizing our current condition that I've taken the liberty of quoting it heavily.

"Modern scientific capability has profoundly altered the course of human life. People live longer and better than at any other time in history. But scientific advances have turned the processes of aging and dying into medical experiences, matters to be managed by health care professionals. And we in the medical world have proved alarmingly unprepared for it.

"When I became a doctor, I had never seen anyone die before and when I did it came as a shock. The shock to me there was seeing medicine not pull people through. I knew theoretically that my patients could die, of course, but every actual instance seemed like a violation, as if the rules I thought we were playing by were broken. I don't know what game I thought this was, but in it we always won.

"Death, of course, is not a failure. Death may be the enemy, but it is also the natural order of things. There's no escaping the tragedy of life, which is that we are all aging from the day we are born. One may even come to understand and accept this fact. I am in a profession that has succeeded because of its ability to fix. If your problem is fixable, we know just what to do. But if it's not? The fact that we have had no adequate answers to this question is troubling and has caused callousness, inhumanity, and extraordinary suffering.

"This experiment of making mortality a medical experience is just decades old. It is young. And the evidence is it is failing.

"This is a book about the modern experience of mortality - about what it's like to be creatures who age and die, how medicine has changed the experience and how it hasn't, where our ideas about how to deal with our finitude have got the reality wrong. I find that neither I nor my patients find our current state tolerable. But I have also found it unclear what the answers should be.
"You don't have to spend much time with the elderly or those with terminal illness to see how often medicine fails the people it is supposed to help. The waning days of our lives are given over to treatments that addle our brains and sap our bodies for a sliver's chance of benefit. They are spent in institutions - nursing homes and intensive care units - where regimented, anonymous routines cut us off from all the things that matter to us in life. Our reluctance to honestly examine the experience of aging and dying has increased the harm we inflict on people and denied them the basic comforts they most need.

"Talk of mortality raises the specter of a society readying itself to sacrifice its sick and aged. But what if the sick and aged are already being sacrificed - victims of our refusal to accept the inexorability of our life cycle?"

This is a book well worth reading to anyone who may be facing this end in the next few decades.
Posted by Jon J Anderson at 8:17 AM
Email ThisBlogThis!Share to TwitterShare to FacebookShare to Pinterest

How to get going on investing? Just do it. It's not a money problem - it's more an emotional issue. @RealSmartica https://t.co/JjWFkD0JHG pic.twitter.com/IgzQwPQUre

I have to tweet this one more time just in case you missed the Wheel of Fortune graphic. @ReformedBroker https://t.co/X0gkX3hdMB pic.twitter.com/XoOmhEozrb