During the turmoil in the U.S. the last several years, I have occasionally taken a fresh look at what people were saying, regardless of how little sense it has made to me. The commentary I struggle with has come from both sides, left and right, and all generations.
For example, Modern Monetary Theory violates everything I’ve ever thought regarding government finance. From the right, it’s still hard for me to realize that behind Trump’s personally offensive behavior, he actually had some policies that were broadly supported, such as extricating us from a decades-long war in the Middle East.

We have the cancel culture telling us there’s only one right opinion on their subjects. Tucker Carlson, a brilliant media marketing person, is working to out-do Trump, and the Squad torments even Nancy Pelosi. We have people who don’t think vaccines are safe or needed and believe that more people pulled a lever for Trump than for Biden. And the world is consumed by a pandemic that has made many of us lose track of some basics, such as time.

And for a while it seemed that lynching blacks was going to once again be acceptable behavior.

In the mix, Me Too and Black Lives Matter have both gained momentum while too many accept holding immigrants in cages. Equality and identity politics have become the rallying cry for everything, both concepts that have little history of driving cultures.

In my ponderings, I wondered what Proverbs would have to say about my struggles. So I read the book, along with some additional commentary. Assuming for a moment you won’t consider writings from thousands of years ago fake news, today I’m sharing my experience with this ancient book. My observation is that it has a lot of good advice for anyone - any religion or not, any political persuasion, any country, any time. Here’s what I learned.

A proverb is a short, traditional saying, often in metaphorical form, that expresses some obvious truth or familiar experience which may be applied to common situations; an adage; a maxim.

Examples include “a path is made by walking,” or “be swift to hear, slow to speak.” “Haste makes waste.” “Practice makes perfect.” “A penny saved is a penny earned.” Or from Afghanistan, “You have the watches, but we have the time.”

The first proverbs came from Egypt about 3000 B.C. About 600 years later Ptahhotep, an Egyptian minister, attained high repute for his wisdom. He wrote the first known piece of Egyptian wisdom literature, “The Maxims of Ptahhotep.” It is possibly the oldest known book in the world. This Egyptian "wisdom literature" was meant to instruct young people in appropriate behavior, with speculations about the very worth and meaning of human life.

Wisdom literature is universal among more advanced cultures, including Egypt, Sumeria, Babylonia, Persia, India and Israel. It was pervasive throughout the ancient east.

The most famous examples of wisdom literature are found in the Old Testament, including Proverbs, but also Job, Psalms, Ecclesiastes and Song of Solomon. I grew up with the protestant Bible and have read it most of my life.

Proverbs are probably the oldest existing documents of the Hebrew wisdom movement, generally attributed to Solomon. Both the Jewish Bible and the Quran consider Solomon a prophet, and a wise and famous king of Israel, dating to the 10th century B.C.

Proverbs is put together from numerous independent collections around the 4th or 5th centuries B.C. Its earliest collections came into being about 700 B.C.

The word proverbs comes from the Latin word proverbium, “a common saying, old adage, maxim.” It literally means “words put forward.” The Latin comes from the Greek, pro,which means “forth,” which is derived from the Proto Indo European (PIE) language root, per, meaning “forward, in front of.” Verb is from Latin verbum, “verb” or “a word,” from the PIE language root were, “to speak, say.”

About half of Proverbs is short, catchy sayings implied by the English word, proverb. But the other half is made up of longer poetic units of various types. These include "instructions" formulated as advice from a teacher or parent addressed to a student or child; dramatic personifications of both Wisdom and Folly; and the "words of the wise" sayings.

Proverbs is composed of 31 chapters, divided into several distinct sections, each section sometimes its own collection of wisdom literature. The first nine chapters are an invitation to the young to take up wisdom as a model for a successful life. The next thirteen chapters, the bulk of the book, have hundreds of sayings, often contrasting the wise person with the foolish person.

The third section (three chapters), titled the thirty sayings of the wise, appears to be a facsimile of an Egyptian wisdom text written by Amenemope (“The Instructions of Amenemope”), dated to 1250 B.C. The fourth section picks up from the second section, focusing now on social awareness, contrasting the just and the wicked, and the rich and the poor.

The final section (five chapters) is attributed to Hezekiah, who according to the Hebrew Bible was a famous king of Judah around the 8th century B.C. The remainder of the book is a mix of appendices that cover a multiple of random subjects.

So what does Proverbs have to say for today? I looked through the current issues plaguing the U.S. and address three areas: prudence, justice and temperance.

Prudence is the importance of wisdom, discipline and reason. Today, we see a country that seems to have left these traits behind, whether instant gratification, avarice, debt, dishonesty, foolishness or general disregard for inner human qualities.

Proverbs first challenges us to seek wisdom versus folly. It asks again and again, “Do you see persons wise in their own eyes? There is more hope for fools than for them” (26:12). “The wise lay up knowledge, but the mouth of a fool brings ruin near” (10:14). I wonder where the anti-vaxxers lie on the wisdom-fools continuum?

Or the notion that we can borrow our way to prosperity? If this is such a great idea, why didn’t we do it centuries ago? (Countless countries have tried, and for the most part failed miserably.) Does anyone but a fool believe our recent election was “stolen”? If so, by whom?

The wisdom of Proverbs doesn’t say we’re all equal, a common notion of modern society. Instead, it says that “One is commended for good sense, but a perverse mind is despised” (12:8). Or "Wise warriors are mightier than strong ones... Wisdom is too high for fools; in the gate they do not open their mouths." (24:5-7). Or “The plans of the diligent lead surely to abundance, but everyone who is hasty comes only to poverty” (21:5).

Think buying things you can’t afford. Hasty comes only to poverty, says Proverbs. “How much better to get wisdom than gold! To get understanding is to be chosen rather than silver” (16:16).

And finally a word to those who see debt as their ticket to freedom: “The borrower is the slave of the lender” (22:7).

Instead, today, we have an abundance of people who value those who talk over others, whether our leaders or our media. Proverbs has plenty to say to them: “To watch over mouth and tongue is to keep out of trouble” (21:23). “One who spares words is knowledgeable; one who is cool in spirit has understanding. Even fools who keep silent are considered wise” (17:27-28). “The mind of one who has understanding seeks knowledge, but the mouths of fools feed on folly” (15:14).

Shame, mouths of the wicked, babbling fools, perverse minds, mouths of fools, folly, haste. I see too much of it in our society.

Proverbs speaks clearly in support of justice, including social justice, and despises injustice, depravity, decadence and laziness. This includes respect for righteousness, harmony, charity and generosity.

George Floyd’s nine minute strangulation by four police officers - all on video - has challenged the notion that the U.S. provides proper justice and charity to its minorities. The video vividly shows how little terror exists within parts of our police, and at times how truly wicked they can be. It brutally displayed the lack of respect segments of our society have for other groups.

I acknowledge that the U.S., with 4% of the world’s population, is incapable of taking in all the millions of people around the world that would so welcome immigrating here. We are in the enviable position of having to secure our borders, not to keep people in but to keep others out.

At the same time, people seeking to immigrate here are often in difficult circumstances, badly in need of help. So, although we justifiably cannot fix the problems of all those asking our help, we can still be kind, generous and sensitive to their issues. Washington - both parties - has been negligent in developing a reasoned approach to this complex problem, compounding the suffering.

Still, this is little excuse for our sometimes insensitive and even callous behavior. An example is our policies to punish so-called sanctuary cities, where our citizens are trying to provide a modicum of social justice. Other examples include indefinite detention, separating families and efforts to arrest illegal immigrants while engaging in otherwise legal behaviors.

Proverbs values temperance, the quality of balance and moderation, restraint, discipline and decorum. Compare these values with many so prevalent in today’s society: a bad tongue, arrogance, obesity, anger, pride and vainglory.

“Pride goes before destruction, and a haughty spirit before a fall. It is better to be of a lowly spirit with the poor than to divide the spoil with the proud” (16:18-19). “When pride comes, then comes disgrace, but with the humble is wisdom” (11:2). “Before destruction one's heart is haughty, but humility goes before honor” (18:12). “Like a city breached, without walls, is one who lacks self-control” (25:28). “Do not boast about tomorrow, for you do not know what a day may bring. Let another praise you, and not your own mouth—a stranger, and not your own lips” (27:1-2).

Ironic, isn’t it, that white evangelical protestants were primarily responsible for giving us a leader who has little value for temperance or justice, and not a lot of prudence. And this same group persists today, willing to lead an insurrection for a man who is the antithesis of Proverbs. Decorum, restraint, harmony, charity, judgement. These are words that he does not know.

I wonder how such church-going, religious Christians can reconcile their leader with a Bible that shouts otherwise.

Proverbs presents a picture of the proper human life that is far different than much of what we see today. It emphasizes wisdom versus folly, temperance versus excess and extremism, and justice versus inequality and bias.

But a world that dismisses wisdom is hardly much interested in what anyone said thousands of years ago. I would ask, though, that we consider for a moment that people are rarely as smart or independent as they think they are, and some quiet contemplation may present a better way forward than today’s shouting match.

And for those who don’t share my Judeo-Christian heritage, I suggest that you look into your own traditions. Wisdom literature and proverbs are widely found in probably all cultures. And I suspect their observations are quite similar.
Posted by Jon J Anderson at 10:26 AM No comments:
Email ThisBlogThis!Share to TwitterShare to FacebookShare to Pinterest

Much is written about 529 plans, the standard tax-advantaged savings plan for a college education. (They are legally known as “qualified tuition plans,” authorized by Section 529 of the Internal Revenue Code.) Their benefits are wonderful - nearly unlimited savings and tax advantages, flexibility and sometimes a state tax credit or deduction.
For those few with significant resources, it is the no-brainer choice for putting away tens of thousands of dollars into a tax-free college fund for your children's college education. 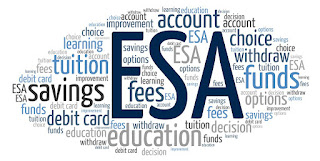