The big news for 2016 is David's college graduation. We've paid our last education bill and the kids all have degrees and jobs. David and Ben now share an apartment in San Francisco, both working for Thumbtack.

David graduated with a double major in mathematics and computer science. While in college, he took four years of classical piano. In his junior year, he started Russian and now reads, writes and speaks it quite well. He spent his last quarter of college with fellow students at Moscow State University. Ann, Ben and I met up with him in Russia when he finished in June and spent a week touring Moscow and St. Petersburg, and then another week in Finland. The trip was wonderful. David was our personal guide and translator, bringing us to great restaurants and endless sites. Russia is this northern land, in many ways similar to northern Minnesota, a land that time forgot. The Orthodox churches are simply amazing. The history is at once horrifying and inspiring, and sent me off on a Russian reading campaign. No, Putin and I aren't Facebook friends, but I've gained a new appreciation for their situation. But regardless of politics, the story of one of the most consequential countries of the past two hundred years is riveting.

With kids in Texas and California, holidays have become a bit more complicated. For Thanksgiving, Ann and I spent over a week in SF at an historic hotel a block from Ben and David. Ann and David made Thanksgiving dinner in their apartment, including homemade apple pie. Our hotel suite was roomier than some apartments, so hanging out there was fine. We took a short road trip down the coast. Ann and I become comfortable walking and taking the bus around most of SF. We found a Starbucks nearby that opened by 5am (haha) – and sold the New York Times. I might retire in that hotel.

For Christmas, everyone is coming home for up to ten days. We’ll spend a couple of days at our place in Lutsen, MN. The kids are then all flying out together to SF for another week together.

Ann and I have done well at home. I’ve joined Ann working our gardens. I had forgotten how much I like yard work. I remember as a kid so enjoying our yard and our land in Michigamme. We landscaped our gardens (including deer proof fences) and now have raspberry and asparagus patches. We also grow beets, tomatoes, peas, lettuce, beans, hot peppers, squash and herbs. The peas sometimes grow taller than me. We also planted plum, cherry and apple trees in the yard.

Ann is now the state rep for northern Minnesota for Celebrate Recovery. She stays in touch with the couple of dozen other CR's in her region, plus travels to short and long summits around the region and country. I usually travel with her. I continue to run the music with the help of over twenty musicians. I returned to playing my now twice reconditioned guitar I bought in college. It has new electronics and a series of pedals. I'm also the primary vocalist, which is new territory for me. Ann and I lead groups at our weekly meetings. We also have after hours closed groups that spend a year walking people through an intense 12-Step recovery program. It includes a series of workbooks that can move almost anyone closer to a personal objective that improves their lives.

After talking about it for over ten years and after sending out over seven thousand Tweets (@JonJosephA), I set up my blog, Confessions of an Investor (InvestorConfessions.com). I'm actually getting a little activity on it. I've made connections with people overseas and was even interviewed by some guy from Bloomberg News. It’s a start.

Merry Christmas and Blessings to You,
Ann and Jon
Posted by Jon J Anderson at 1:23 PM No comments:
Email ThisBlogThis!Share to TwitterShare to FacebookShare to Pinterest

An Irrationally Exuberant Call to Action

I was excited to read Robert Schiller's 3rd edition of Irrational Exuberance. He's famous for calling both the internet and real estate bubbles. Somewhat predictably - and justifiably - he's quite concerned that after tripling from its lows in 2009, the US market is again in a bubble. The book is a wonderful read on how stock markets, bond markets and real estate markets all can get into bubbles and busts. He exhaustively makes the valid case that there is no such thing as a rational market. 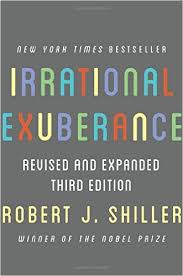 OK, I buy it. I've lived through three market crashes and watched the horrors of the most recent six year real estate crash. I realize that nothing is supporting the value of my house, retirement and even my dollar bills except what others perceive it to be. I also realize that there is no supposedly secure place to rest my life's savings. Like so much in life, there really aren't any guarantees. Waking up tomorrow is only a bet.

But I looked forward to Mr. Shiller's last chapter, A Call to Action. I don't like being acted upon, far preferring to take action. Here's where I hoped to learn some tips for dealing with the vagaries of markets.

Well, that wasn't to be. The Call to Action is at best some ideas for government and leaders that may soften some of the harder edges of bubbles and busts. He encourages leaders to help people through these rough times, even while he acknowledges that views that a market is over or under priced are never universally held. He says that monetary policy should "gently lean" against bubbles, but he also says the Fed probably shouldn't try to burst a bubble through aggressive tightening. This is pretty timid action.

He suggest that opinion leaders should offer stabilizing opinions. That institutions should encourage constructive trading with tools such as circuit breakers. That the public should be helped to hedge risk. The public? Helped? Hedge risk? Who can do this, and how and when?

For us, the individual investors, he rightfully suggests we not pull investments out of the market in favor of bonds, and that we shouldn't be "lulled into complacency," that things can go bad.

So the call to action is mostly little or no action, which is about how I handle busts. Minimize your risk, primarily by keeping close to a fixed allocation, by saving regularly and by responding little to bubbles and busts except to reallocate to your original plan.

I still highly recommend this book. If you believe him, you will understand why you can't take a lot for granted; you can't assume any stock, bond or house is necessarily going to rise predictably according to some formula. Instead, they can all float in time and space at various valuations, and you can only live assuming they will eventually probably go somewhere good.

And for assurance, keep up your health, relationships and interests. Even with the best of planning, you may one day find that's about all that you have.
Posted by Jon J Anderson at 3:47 PM No comments:
Email ThisBlogThis!Share to TwitterShare to FacebookShare to Pinterest
Newer Posts Older Posts Home
Subscribe to: Posts (Atom)