First, let me clarify: I keep most of my life savings in low-cost indexed funds. It's mostly the no-brainer way to invest. At the same time, I struggle with the unavoidable structure of indexes where more is invested in an overpriced security and less in an underpriced security. My brain says to do the opposite. I've never fully accepted this situation as "good enough." Further, I fundamentally believe that with reasonable research, intelligence and emotional control, an individual can outperform the indexes. Blasphemy - I know. I'm still trying to prove myself right.

Therefore, I allow myself to allocate a portion of my securities to individual stocks. For example, for over 15 years ago, I have periodically traded Ford, once selling it at 6 times its purchased price. Ford remains the best purchase I've ever made.

For years, I have also followed the world's largest private-sector coal company, Peabody. A few years ago I bought Peabody while it was on one of its periodic downward swings. When it dropped still further, I again researched the company. I noted that even the International Energy Agency predicted that coal would continue to be a huge and expanding source of energy worldwide - which it still is. I was confident that all was well, and I doubled down on my losses. Then for two long years I watched while it continued a steady decline into bankruptcy. Peabody is my worst purchase ever, wiping out all my Ford gains.

Contrary to popular thought, renewable energy didn't sink Peabody. It was undone by the low cost of shale natural gas and by a leveraged coal mine acquisition. Coal prices dropped with demand and the company couldn't service the debt.

Where did I go wrong? First, I didn't let the stock settle at a bottom before buying. Twice I bought into a steadily sinking stock. Second, I didn't look carefully at Peabody's heavy debt. Financial analysis is not just about profits and cash flow. It's also about the ability to handle rainy days. Last, it could be argued to sell after a certain point. But it can also be argued to buy at the same point.

For you, I offer some lessons. To repeat, indexing is a very good way to invest. With some basic understandings of investing and an occasional review of your holdings, you should do very well with little work. In contrast, it is risky to buy individual stocks. If Peabody can go under, so can anything else - including Amazon, Microsoft and, yes, Tesla. Second, you should understand anything that you buy, but regardless, you (and the expects) can still be widely off the mark and you can lose a lot of money. Finally, this is an extreme example. Most established stocks continue on year after year for decades, paying and increasing dividends, and gaining in value.

I still have my mostly worthless Peabody shares. Peabody continues to produce huge amounts of coal over six continents. And a couple of months ago I again bought Ford. 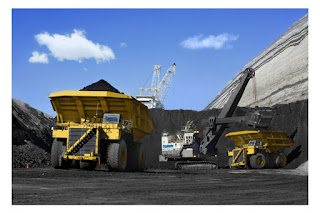 Posted by Jon J Anderson at 5:43 AM
Email ThisBlogThis!Share to TwitterShare to FacebookShare to Pinterest